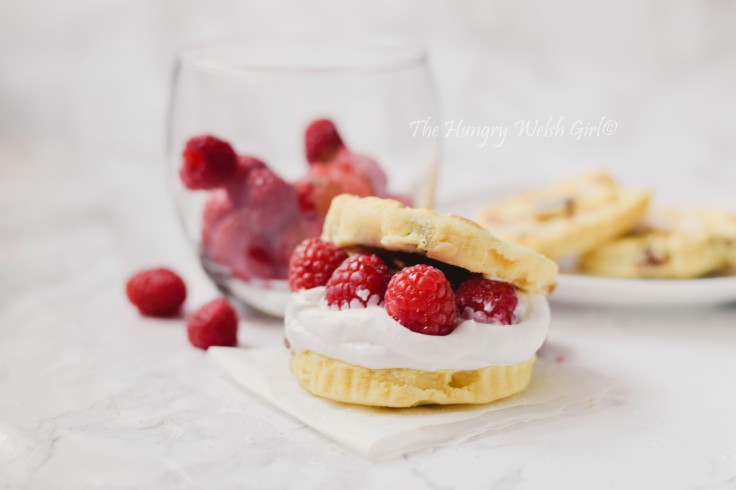 I grew up with my mother always baking cakes, for both my sister and I to take to school  fetes and parties, and among those bakes were jam splits: welsh cakes with jam in the middle.

The first batch of Welsh cakes that I made on Friday were quite thin, so I didn’t fancy messing around and cutting my welsh cakes open, to have them potentially crumble and break under my heavy hands. Instead, I decided to sandwich them with some vanilla whipped cream and fresh raspberries. I think its safe to say that it’s the best idea  I’ve had in a while. Although, it doesn’t take much persuading on my part to add whipped coconut cream to food and drinks. I just love the stuff.

If you have made my welsh cakes already then this recipe will be even easier for you to create.

Take some coconut cream or coconut milk and using an electric whisk, beat the coconut milk/cream until it starts to become light and airy; while doing this whisk in the coconut oil, vanilla and sweetener, and freeze for 10 minutes.

NB: After your coconut cream has been in the freezer it should now act more like dairy whipped cream, as the coconut oil should have solidified.

Take a welsh cake and dollop  some of the coconut whipped cream on top, layer with raspberries and simply top with another welsh cake.

For more recipes, reviews and ideas follow me on Instagram and tag me #TheHungryWelshGirl if you make any of my recipes.