I know I posted a BBQ sauce recipe with my shredded BBQ Slaw sliders, the other day. But, I feel that a separate post dedicated to this delicious condiment was necessary. Plus, it has taken me over a year or longer, to create a BBQ sauce that actually tastes like BBQ sauce and not a spiced version of tomato sauce. So, I will stress that the molasses and all spice are essential in this recipe, and while the liquid smoke is optional, I still highly recommend it.

I’m also not one to toot my own horn when it comes to my own recipes,  but this BBQ sauce is bloody good and I’m so pleased with myself for making it – too much horn tooting? Anyway, make it and thank me later.

I never intended on making any new recipes today, but that never works out when I have time to myself. Plus, something delicious is always being assembled in my head when I can’t get in to the kitchen. So, obviously when I’m home I can’t resist the urge to bring those ideas to life. I then found a huge punnet of tomatoes turning a little fuzzy in my fridge –  a quick wash under the tap and they were a bit more acceptable. Although, still very squishy and feeble, but very photogenic all the while and  I couldn’t help but take way too many photos of their beautiful colour and interior.

You may think creating homemade sauce yourself from scratch, is difficult. But, I can’t express enough how simple it is, plus,  if you don’t have the time to stand over a pot, you can always add the ingredients to a slow cooker instead. I can only imagine the flavours would be a lot more intense when slow cooked –  just like how they were when I made my shredded slow cooked, BBQ Slaw the other day. 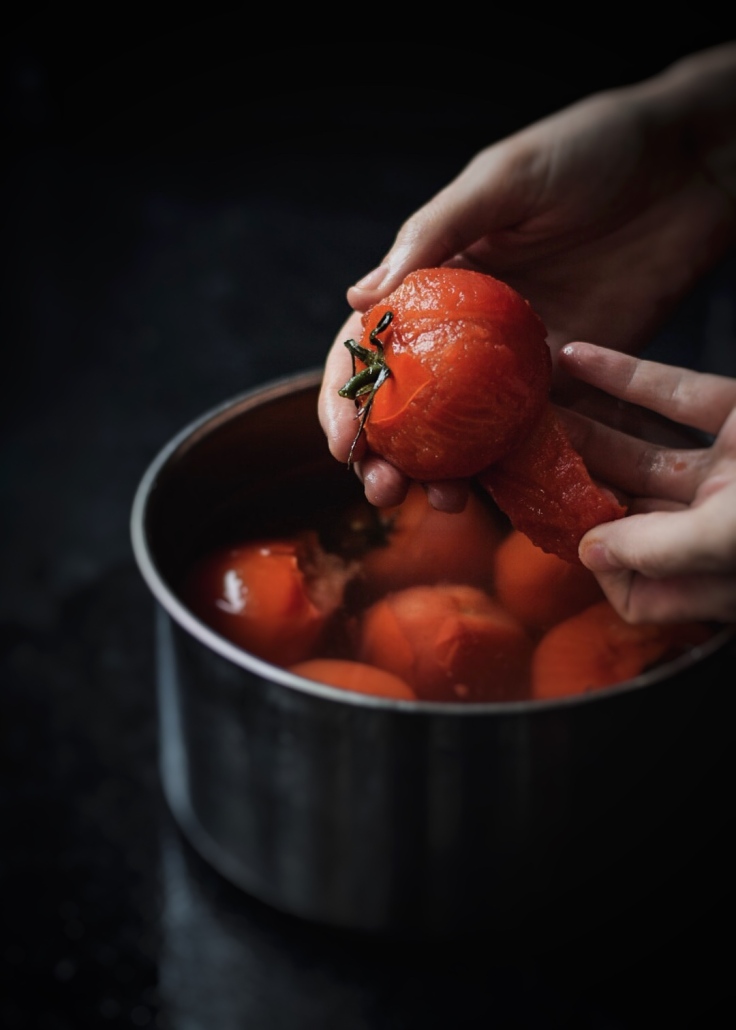 Even peeling the tomatoes is a breeze when making homemade sauce  – place them in a bowl or pan of boiling water, leave them sit for 15 minutes and when you return the tomatoes should mostly already be out of their skins. Although, peeling the skin off the tomatoes, gives me a sick satisfaction – like peeling dead sunburnt skin – I know. But, I did say it was sick.

NB: While the liquid smoke is optional, I highly recommend it as it adds that perfect smokey flavour which will replicate the BBQ sauce we all know and love. Plus, as it’s so potent, a little goes a long way. If you want a darker BBQ sauce you can add a touch of gravy browning -totes vegan too.

Place your tomatoes in a bowl of boiling water and leave them sit for 10-15 minutes. Now, you can peel them and they should slip right out of their skins

Roughly chop the red onion and place it in a medium saucepan along with the tomatoes and leave to cook on a medium heat for twenty-twenty five minutes or until the tomatoes have broken down in to a watery puree and the onions are soft.

Stir in the remaining ingredients and leave the sauce simmer on a low heat, for thirty minutes. Stir the sauce often so that it doesn’t stick to the bottom of the pan.

Using a stick blender, blend the mixture into a smooth sauce. You can also leave the sauce cool and use a high-powered blender too. Now, make a paste with the cornflour by adding the tablespoon of cold water to the flour and stirring. Next, put the sauce back on a medium heat and add the cornflour paste into the BBQ sauce – stir continously until it has thickened.

Store in a sterile jar or bottle, in the fridge. Now you can use it whenever you need BBQ sauce and it would be great for marinading tofu, faux meat, cauliflower buffalo wings too.

For more vegan ideas follow me on Instagram  and tag me in any of my recipes that you try. I would really love to hear your feedback whether it’s good or bad. You could also comment your thoughts below 🙂 I also have a personal Instagram, which is basically more food.

© The Hungry Welsh Girl 2016
All photos, recipes and texts are copyrighted unless otherwise stated.
All Rights Reserved.